Then and Now: Big Top Theater and Circus Cinema, NYC

A Change of Habits

Times Square is one of the great tourist attractions in the world. Tourists come from around the world to walk through it and admire the lights and the architecture and the hustle-and-bustle. It may look very similar to the way it used to, but in truth, it has changed dramatically in the last 40 years.
The Times Square area has been cleaned up quite a bit during the last few decades. "Hustle" had a completely different meaning in the Times Square of the 1970s. During the city's dark days, the adult industry invaded the area in a big way. It wasn't hidden away, either, it was right there out in the open. You've heard of Broadway theaters, well, the Broadway theaters of the 1970s were not just showing "Man of La Mancha" and "Chicago."

The corner of 49th Street and Broadway is right on the fringes of Times Square. It's just a short walk from Madame Tussauds and the Disney store. Great place to bring the family these days.

Well, the area serviced a completely different clientele back in the day. 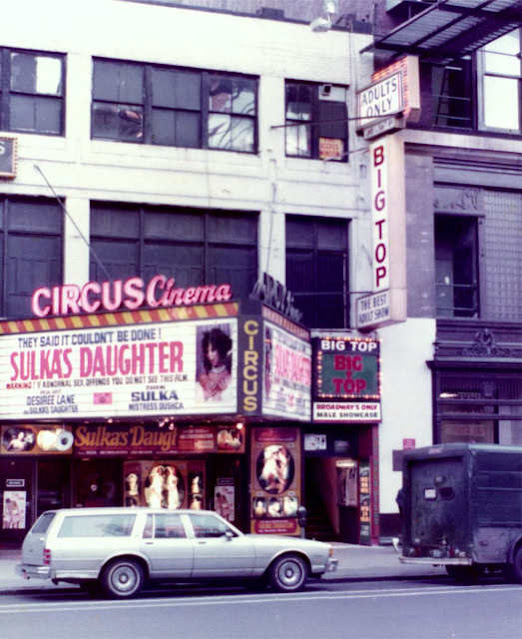 Located at 1604 Broadway were two theaters that easily could be mistaken for just one. The more obvious theater with the big marquee was Circus Cinema. It showed films for the heterosexual raincoat crowd throughout the 1970s and 1980s. Somewhat obscurely located to its side was a completely different experience, "Big Top Theater." This was entered via a stairway just to the south that led to a separate theater above Circus Cinema. This catered to a same-sex clientele. So, the building catered to a broad spectrum of people looking for something a little different than "The Aristocats" and "Star Wars." 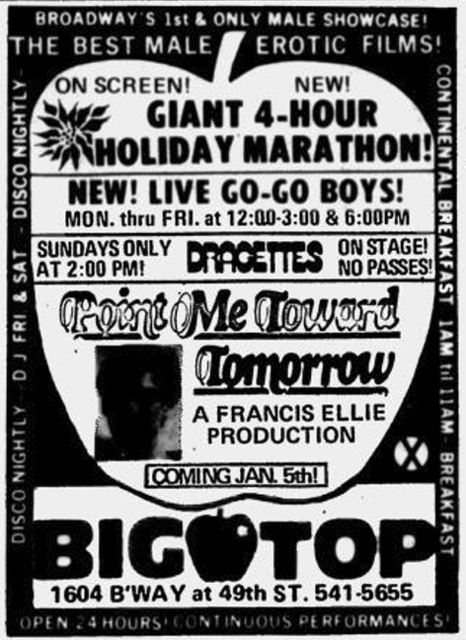 Just looking at the advertisements that appeared in all of the normal newspapers of the day (such as the New York Times, Newsday, you name it) gives you some idea of the types of shows shown at the Big Top. "New! Live! Go-Go Boys!" reads one advertisement. This was all out in the open, with the ads in the theater section near the back of the newspaper. Yes, those were different times. 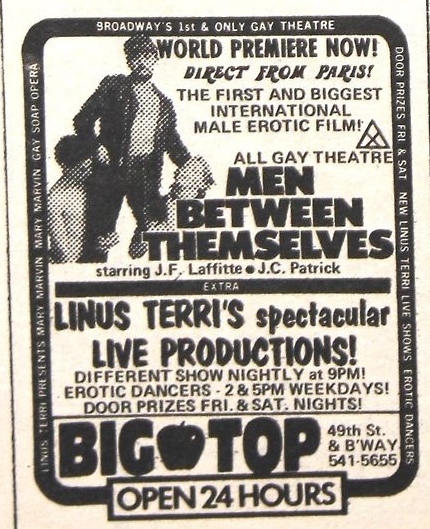 "Men Between Themselves" was not a World War II film - I think. Actually, I don't know when it was set, but I have a feeling the setting was likely Fire Island or Key West. But, who knows.

These days, the raunchy theaters are almost all gone (there may still be one or two over on Eighth Avenue, I'm not entirely sure). The scene above shows how the same corner looks recently. Just to verify that this is the same location, notice the medium-sized brown building in the background of the photo at the top of this page. I've zoomed in on it below just to verify the location.
One of the themes of this blog is that despite the fact that NYC streets and buildings look the same as in the past, the world around them has changed. It now is a completely different world even though in some ways it looks the same. Times change, people change, but in New York City, many of the buildings stay the same.
I hope you enjoyed this entry in our "the more things change, the more they stay the same" series. Please visit some of our other pages if you liked this one!
2020
Posted by James Bjorkman at 10:04 PM