Then and Now: Bleecker and MacDougal, NYC

Cafe Figaro was a Greenwich Village landmark. This is a comparison of the corner of Bleecker Street & MacDougal Street, New York, NY, from the 1960s until the present. That is the location of Cafe Figaro. 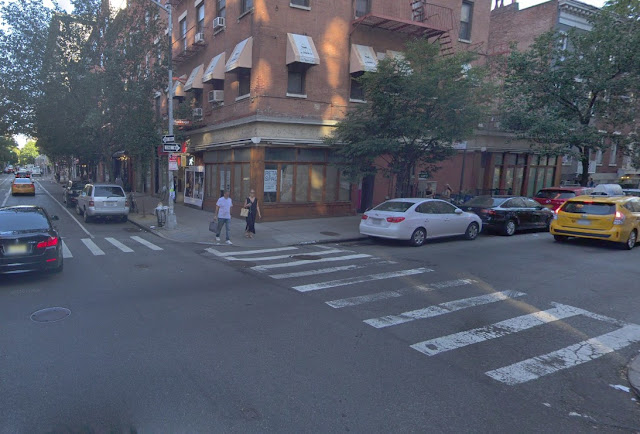 
Among the customers over the years, lingering over their coffee cups for hours on end, were Bob Dylan, Lenny Bruce, and Jack Kerouac.

It was a central mixing bowl for the Beat Generation and the hippies that followed. It was a joint, at least back in the day. One can imagine it like a little French sidewalk cafe planted in the heart of Greenwich Village. The distinctive striped awning helped to define an entire neighborhood. Without it, the area just doesn't feel the same. Putting another drugstore or restaurant into that space isn't going to fill the void. 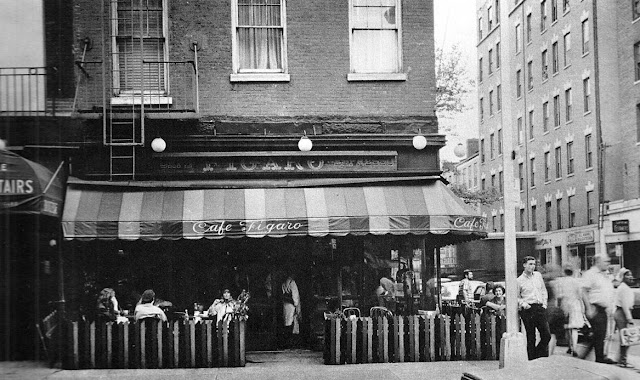 For some reason, 2008 was a very rough time for New York City landmarks, at least of the offbeat eating kind. For instance, Florent, the all-night diner in the Meatpacking District, closed in June 2008. Le Figaro Café at 184 Bleecker Street in Greenwich Village closed around the same time, also in June 2008. Incidentally, the actual name of the establishment apparently was Le Figaro Café, but I never heard it called that. Cafe Figaro is how everyone knew it - and everyone knew Cafe Figaro. I must have walked by it a hundred times, probably hundreds, and it always seemed busy, although by my time it was basically just a tourist spot. Unfortunately, rents rose like crazy in New York City during the early 2000s and chased out many fine establishments. In any event, even if Bleecker Street itself has stayed remarkably intact for the past 50 years, its Bohemian character swirled down the drain long ago. Now, Blecker Street between Sixth Avenue and LaGuardia - to my mind, the only "real" Bleecker Street, though others will differ strongly - has lost much of its panache and differs little from the mundane streets nearby. 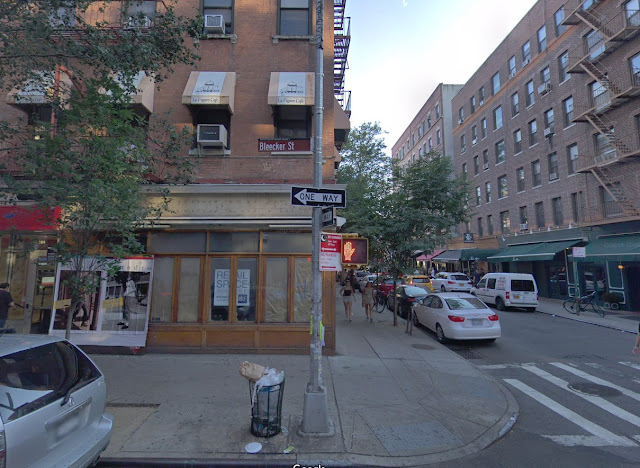 Anyway, we can see that the south corners of Bleecker and MacDougal have changed little in the past fifty years. The same buildings stand, the same crosswalk, even, apparently, the same light stanchion. However, it's completely different, because the heart and soul and, most importantly, the people that made it famous are long gone. However, that's the nature of the Big Apple. New generations stomp across the same pavement and create their own myths and cultural steppingstones, and those of the past gradually fade away. That's the way it must be, and today's hotspots will meet the same fate in their turn. Yes, that place that you love, the one you can't live without - eventually it, too, will lose its mojo and shut down forever. That's just the way of it.

Anyway, I hope you enjoyed this entry in my series of "The more things change, the more they stay the same." Please visit the other entries in the series!